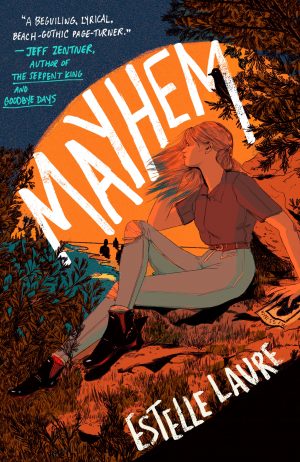 A YA feminist mash up inspired by The Lost Boys and The Craft.

It's 1987 and unfortunately it's not all Madonna and cherry lip balm. Mayhem Brayburn has always known there was something off about her and her mother, Roxy. Maybe it has to do with Roxy's constant physical pain, or maybe with Mayhem's own irresistible pull to water. Either way, she knows they aren't like everyone else. But when May's stepfather finally goes too far, Roxy and Mayhem flee to Santa Maria, California, the coastal beach town that holds the answers to all of Mayhem's questions about who her mother is, her estranged family, and the mysteries of her own self. There she meets the kids who live with her aunt, and it opens the door to the magic that runs through the female lineage in her family, the very magic Mayhem is next in line to inherit and which will change her life for good. But when she gets wrapped up in the search for the man who has been kidnapping girls from the beach, her life takes another dangerous turn and she is forced to face the price of vigilante justice and to ask herself whether revenge is worth the cost.

From the acclaimed author of This Raging Light and But Then I Came Back, Estelle Laure offers a riveting and complex story with magical elements about a a family of women contending with what appears to be an irreversible destiny, taking control and saying when enough is enough. (less)

HMM. This one is hard to review. Tagged as a feminist mash-up of The Lost Boys and The Craft, I knew I had to read this. Those are two of my favorite cult classics. And it turns out its easy too see the resemblances…. Wayyyyyy to easy. Like, identical in many ways to The Lost Boys.

IT FEELS IMPORTANT TO NOTE THAT YOU WILL PROBABLY LIKE THIS BOOK MORE IF YOU HAVE NEVER SEEN THE LOST BOYS.

Im not going to go back over the plot since its stated above, I am just going to jump into my thoughts.

The first almost half of the book felt slow, so when things started happening, it all seemed pretty rushed. I understand what the author was trying to do and why she let these movies inspire her. She wanted girls/women to read something that gave them a feeling of power, the feeling that they could take back the night. And that’s fantastic. But I am not sure I like how it was executed. I might have actually liked this book more if it wasn’t literally ripped right off the screen.

At one point there was a reference by two characters to vampires in town (which, of course, the characters and the line are straight from Lost Boys) so I wondered if the story would go in the direction of vampires, but it did not. Unless they are vampires who can feed on souls and try to use their powers for good. Powers include: using your mind to travel at an exorbitant speed, see peoples past, read peoples intentions, finding people/things, soul sucking… and it is all stemmed from fancy water that is drank in a fancy hideout club cave off the side of a cliff at the beach. So really, why even bring up the vampire thing anyway, since literally nothing came of it? Was that just placed there to remind us what movie this is based on?

And if they are trying to find the kidnapper/murderer of these young girls, why were none of them saveable? Like, some were found alive instead of them all ending up dead and in pieces? They could have used their powers of finding people to find some of the girls.

As far as The Craft goes, the only time I really got a likeness is when Neve (a side character, the main character is Mayhem….) goes completely off the rails for no good reason other than the addiction to the magical water messing up her body. She went crazy with power, a la Fairuza Balks character in The Craft. While we are on the topic of Neve… wait I just realized something as I was typing. There is an actress in The Craft named NEVE Campbell, so there’s another connection…. Anyway, I feel like Neve’s storyline just like, got lost on the way to the end of the book. Really, I feel like a lot of things weren’t properly wrapped up. Things brought up and not followed through on…. I don’t know. I feel like my review has turned into a rant as I started processing all my feelings.

I normally love to read books inspired by some of my favorite movies, but typically the story has its own plot and does something to spin or twist the film it was inspired by. In this case, the only twist seemed to be that the main characters/heroes were girls/women. The history of the women in the family is one of the things I really liked in this book. It gave me Practical Magic vibes.  I also like how they were so rooted to their town, and the town cherished them instead of harassing them or being frightened of them.

Overall, I think the likeness to The Lost Boys took this book down a notch for me. Outside of that, the magic and the water are unique, the history of the women in the family is interesting and helped add to the explanation of of their powers. It does give you a bit of that “take back the night” vibe, and hopefully this book can help a girl to maybe not be so afraid of what lurks in the dark.