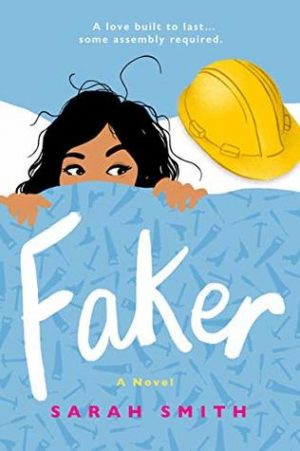 Emmie Echavarre is a professional faker. She has to be to survive as one of the few female employees at Nuts & Bolts, a power tool company staffed predominantly by gruff, burly men. From nine to five, Monday through Friday, she's tough as nails--the complete opposite of her easy-going real self.

One thing she doesn't have to fake? Her disdain for coworker Tate Rasmussen. Tate has been hostile to her since the day they met. Emmie's friendly greetings and repeated attempts to get to know him failed to garner anything more than scowls and terse one-word answers. Too bad she can't stop staring at his Thor-like biceps...

When Emmie and Tate are forced to work together on a charity construction project, things get...heated. Emmie's beginning to see that beneath Tate's chiseled exterior lies a soft heart, but it will take more than a few kind words to erase the past and convince her that what they have is real.

Emmie Echavarre works in a male-dominated field and is, according to herself, a professional faker. The tough facade she puts on from nine to five Monday through Friday is a stark contrast to her otherwise easy-going self – but Emmie considers it a necessity to hold her own against the primarily male workforce at her power tool company. Her co-worker Tate and she don’t get along from the moment he enters the picture, despite her initial efforts to be friendly and establish some sort of professional relationship between the two. When they are thrown together for the company’s homebuilding charity project, and frequent interactions become inevitable, things take a drastic turn.

Faker is the debut novel of copywriter-turned-author Sarah Smith, who enters the stage with a colorful enemies to lovers rom-com.

To be honest, I wished I liked this one more than I did. I’m a sucker for a well-written enemies to lovers story and was excited about the opportunity to read it, but parts of it simply didn’t click with me.

During the initial chapters of the book, I tried to figure out their rather complicated relationship. I suspected that there was more to both, Tate and Emmie than meets the eye, but sometimes I wondered how the hell they would go from their intense hate relationship to lovers. And that’s saying something because you expect the characters not to like each other from the get-go.

Emmie’s overall switch from nemesis to more than friends then happened rather abruptly, and way too quickly for my taste, considering where we started. The fact that he has a Thor-like biceps and milky white skin is not enough for me. The shift from enemies to lovers simply didn’t have enough time to develop, and somehow, all their differences and previous fighting became irrelevant.

After the turning point somewhere around the first third of the book, things got slightly better. Their relationship started to develop at a bit more realistic pace, and slowly, the heat and the playful banter emerged. I can honestly say that I enjoyed the following chapters of the book, watching them dance around each other at work and other obstacles. There was a bit of drama in the last couple of chapters, which explains Tate’s initial hostility towards Emmie, but this conflict was also put aside rather quickly. I feel like it was meant to be the earth-shattering fight that we know from all kinds of love stories, but it ended up lasting less than an hour.

While it wasn’t one hundred percent my cup of tea, it is still a light and quick read. If the ‘enemies to lovers’ storyline is your thing, check it out maybe it works better for you than it did for me.