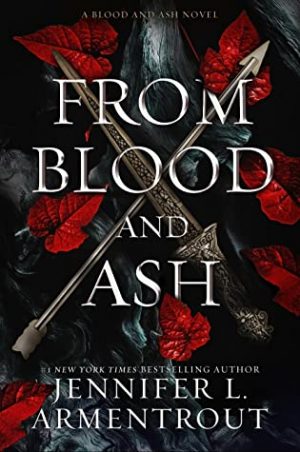 Captivating and action-packed, From Blood and Ash is a sexy, addictive, and unexpected fantasy perfect for fans of Sarah J. Maas and Laura Thalassa.

Chosen from birth to usher in a new era, Poppy’s life has never been her own. The life of the Maiden is solitary. Never to be touched. Never to be looked upon. Never to be spoken to. Never to experience pleasure. Waiting for the day of her Ascension, she would rather be with the guards, fighting back the evil that took her family, than preparing to be found worthy by the gods. But the choice has never been hers.

The entire kingdom’s future rests on Poppy’s shoulders, something she’s not even quite sure she wants for herself. Because a Maiden has a heart. And a soul. And longing. And when Hawke, a golden-eyed guard honor bound to ensure her Ascension, enters her life, destiny and duty become tangled with desire and need. He incites her anger, makes her question everything she believes in, and tempts her with the forbidden.

Forsaken by the gods and feared by mortals, a fallen kingdom is rising once more, determined to take back what they believe is theirs through violence and vengeance. And as the shadow of those cursed draws closer, the line between what is forbidden and what is right becomes blurred. Poppy is not only on the verge of losing her heart and being found unworthy by the gods, but also her life when every blood-soaked thread that holds her world together begins to unravel.

With her most recent surprise release From Blood and Ash, Jen officially joined the ranks of high fantasy authors with a massive bang. It’s hands down the best book I’ve read this year, and definitely one of her best books to date. From epic fight scenes, over swoon-worthy men to strong female characters and steamy forbidden romance – this book has it all.

Despite being on unchartered territory in terms of world-building as all of the worlds in Jen’s previous books are alterations of the world as we know it, she absolutely nailed it. The detail of this world is mind-blowing – from the different “races” and their respective culture and traditions to the architecture and landscape. The picture she painted was so vivid it feels like I’ve seen it all with my own eyes.

We are introduced to the story by our heroine Poppy, who, as the Maiden, has never been allowed to choose for herself and experience things most would consider normal. Never to be touched. Never to be looked upon. Never to be spoken to. To the outside world, she is the dutiful, quiet, and always obedient Maiden, awaiting her Ascencion. In reality, Poppy has been to hell and back and vowed never to be defenseless again. She’s strong, fierce, and determined to experience life before her Ascencion, whatever the cost. Her particular brand of sassiness completes the package and brings the playful banter and humor to the story. I absolutely adore her character.

Then there’s her male counterpart – Hawke. Swoon-worthy, dark-haired, golden-eyed, sassy AF! Hawke. Watch out Aiden, Seth, Daemon, Zayne, and Co. you have serious competition. He’s a warrior – respectful, dutiful – and the same time, so damn unapologetic about his opinion, even if it would be considered inappropriate, and about who he is in general. He’s flirty, playful, and fiercely protective of people he cares about. He’s damn near perfect. Hawke officially enters the picture when he unexpectedly becomes part of Poppy’s security detail. From here on out, we watch the two dance around each other, fight and argue, and before either of them notices, there’s more at stake than Poppy’s future.

I honestly can’t say enough good things about this book. Jen has an unmatched ability to take a popular theme and turn it into something original and unexpected. I was glued to my kindle from the first page to the last. I have no idea how I’m going to survive the wait for the sequel. Must-read for everyone!