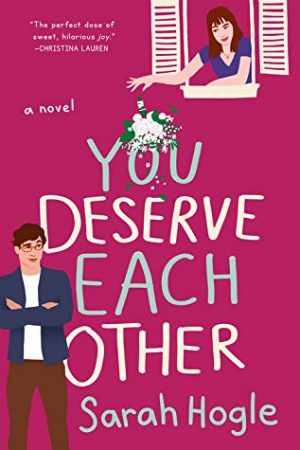 When your nemesis also happens to be your fiancé, happily ever after becomes a lot more complicated in this wickedly funny, lovers-to-enemies-to-lovers romantic comedy debut.

Naomi Westfield has the perfect fiancé: Nicholas Rose holds doors open for her, remembers her restaurant orders, and comes from the kind of upstanding society family any bride would love to be a part of. They never fight. They're preparing for their lavish wedding that's three months away. And she is miserably and utterly sick of him.

Naomi wants out, but there's a catch: whoever ends the engagement will have to foot the nonrefundable wedding bill. When Naomi discovers that Nicholas, too, has been feigning contentment, the two of them go head-to-head in a battle of pranks, sabotage, and all-out emotional warfare.

But with the countdown looming to the wedding that may or may not come to pass, Naomi finds her resolve slipping. Because now that they have nothing to lose, they're finally being themselves--and having fun with the last person they expect: each other.

So, I have mixed feelings about this book. The synopsis drew me in from the beginning – a couple that tries to their hardest to make each other quit their relationship? Pranks? Sabotage? Usually, I’m totally game for this sort of cat and mouse game; but I’m sad to say, I didn’t like the book as much as I had hoped, and here’s why:

Firstly, I had a hard time finding into the story. The main reason for that being that I can’t even imagine how one lets get things so out of hand. I know these things happen quietly and slowly, and before you know it, you’re looking in the mirror and don’t recognize yourself, but how can you even consider going through with a wedding when that’s where your heads at? No matter how it looks from the outside. Needless to say, one chapter in, I was ready to throttle him and shake some sense into her. The introduction is obviously necessary for the storyline, but I had my issues with it.

I sympathized with Naomi a bit more in the beginning, as the story written in her point of view, and I’m a female who also has a bit of a flare for the dramatic. Also, I believe a man should never choose the contentment of his mother over his future wife’s simply because his mother would be the bigger problem. So, that was strike one against Nick. His mother is literally the devil, by the way.

However, once the story progressed into the phase where they try to get the other to throw in the towel, things got better. While the pranks and fights were a bit over the top at times, they slowly became their middle ground. Their attraction to each other definitely makes things interesting, because Naomi for one, doesn’t necessarily want to be attracted to Nicholas. Not anymore, at least. They eventually realize that both are at fault for their predicament and open up to each other about their issues, things they want and care about; basically, they stop telling the other what they believe they want to hear and are honest with each other for a change.

I actually really liked that part, and that also means both characters come a long away throughout the story – character development on point. Amidst all of this, Naomi and Nick find their way back to each other and realize that the things they want aren’t that different. The last drama bomb was a bit unnecessary, in my opinion, as we had established that communication is the key and not jumping to conclusions and making a run for it. Still, in the end, we get our happy ending, and that is what we hope for reading romance novels, right?

Long story short, while this one wasn’t one hundred percent my cup of tea, it’s still a nice and quick read. Come to think of it, a dual point of view would have been awesome for this one. I love getting both sides of the story. If the enemies to lovers set-up is your thing – give it a shot.