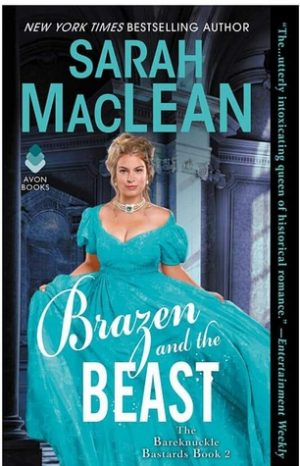 The Lady’s Plan
When Lady Henrietta Sedley declares her twenty-ninth year her own, she has plans to inherit her father’s business, to make her own fortune, and to live her own life. But first, she intends to experience a taste of the pleasure she’ll forgo as a confirmed spinster. Everything is going perfectly... until she discovers the most beautiful man she’s ever seen tied up in her carriage and threatening to ruin the Year of Hattie before it’s even begun.
The Bastard’s Proposal
When he wakes in a carriage at Hattie’s feet, Whit, a king of Covent Garden known to all the world as Beast, can’t help but wonder about the strange woman who frees him—especially when he discovers she’s headed for a night of pleasure... on his turf. He is more than happy to offer Hattie all she desires... for a price.
An Unexpected Passion
Soon, Hattie and Whit find themselves rivals in business and pleasure. She won’t give up her plans; he won’t give up his power... and neither of them sees that if they’re not careful, they’ll have no choice but to give up everything... including their hearts.


I received this book for free from Publisher in exchange for an honest review. This does not affect my opinion of the book or the content of my review.

Lady Henrietta Sedley is tired of trying to meet society’s expectations. At twenty-nine, still a maiden, and yet an entrepreneur genius, she decides to take matters in her own hands and ‘ruin’ herself, according to society’s laws.

Too bad that when she opens her carriage she finds tied and gagged none other than Whit, a king of Covent Garden, also known as Beast. And too bad that he becomes so enthralled by her that a game of seductions and wits begins between them.

This was the first book I reviewed by Sarah MacLean and also the second in her historical romance series. Needless to say, that I enjoyed every bit of it; from the humor and the descriptions to the dashing ballrooms and the dresses. London in the 19th century is an era that I enjoy both in books and in movies since you have some of the most amazing fashion trends and it’s the Victorian period.

What made this book differently was Henrietta’s willpower to defy social standing, her own social status as a Lady and as a woman, in order to achieve her dreams. For those who don’t know, being a woman in the 19th century left you only with few choices. Women of high status didn’t work and their…ahem…status as maidens was well prized if they wanted to get a husband (which looked a lot like going into the supermarket and trying to decide between different flavors of ice cream. The richest one in flavor wins.) For this reason, Henrietta tries to stand up against the social system with a father who despite being proud of his smart daughter he’d never give her the business and with a brother is a jerk and just by being a man he is entitled to everything.

And Whit? I loved that from the beginning even before admitting his feelings for her, he supported her aspiration to get the shipping business, despite handling everything at some times a little…roughly? No matter, their romance was amazing with a slight touch of Beauty and the Beast.

As for the main villain of the series? It remains to be seen what will happen to him, especially after the amazing ending of this book!

If you enjoy historical romance with great doses of humor, accurate historical interpretation, and swoony scenes then this is for you!

When she isn’t doing historical research in Greece, Alexandra hunts for dragons, the long lost unicorn, and dreams of Belle’s Library. She writes on Wattpad and her PNR YA trilogy “Three Ghosts for Anastasia” has been published on the Tapas app. She loves characters who have to face high stakes, fantasy that can sweep you off your feet, magical creatures of all kinds and of romance that makes her swoon and beg for the real-life version of it. Since 2013 she owns Milky Way of Books. She is a proud Hufflepuff, loves chocolate and raving about mythology. Some of her favorite authors include Jennifer Armentrout, Sarah J. Maas, Karina Halle, and Margaret Rogerson.