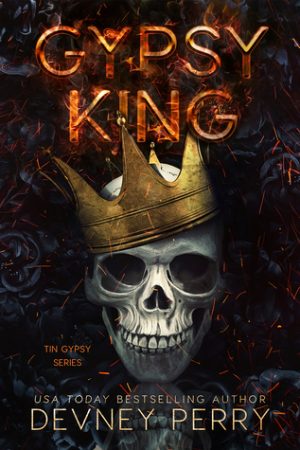 The former Tin Gypsy motorcycle club has everyone in Clifton Forge, Montana convinced they’ve locked their clubhouse doors and ripped off their patches. Everyone but Bryce Ryan. There’s more happening at the club’s garage than muscle car restorations and Harley rebuilds. Her instincts are screaming there’s a story—one she’s going to tell.

As the new owner of the small town’s newspaper, Bryce is hungry for more than birth announcements and obituaries. When a woman is brutally killed and all signs point to the Tin Gypsies, Bryce is determined to expose the club and their leader, Kingston “Dash” Slater, as murderers.

Bryce bests Dash match after match, disappointed her rugged and handsome opponent turns out to be an underwhelming adversary. Secrets are exposed. Truths defeat lies. Bryce is poised to win this battle in a landslide.

Then Dash breaks all the rules and tips the scales.

“I’d been waiting for my Gypsy King.”

This story is the perfect mixture of small town and motorcycle club romance that will get your heart pumping and melt it on the same page. In one book, Devney gives us murder and secrets alongside family and loyalty. What else could you want? I’ve been waiting for Dash’s book since before it was announced Dash was getting a book (a girl can hope), and this was everything I wanted and more.

“It wasn’t black and white, this world he’d pulled me into. There wasn’t a clear-cut line between right and wrong, not like I’d believed before.”

Let me get started on Bryce because I absolutely love her and want to become BFFs. She was stubborn and strong when she needed to be, but didn’t play games. As a fellow journalist, I felt the same pull to deliver that mind-blowing story. But the deeper she immersed herself into this world, the harder it became to look at it as just another story. She owes it to the people to give them this story. But is it worth the price?

I loved actually getting to know more about the man we were vaguely introduced to in The Clover Chapel. While Dash wouldn’t consider himself a good man, he had matured and became someone he could look at in the mirror each day. He’s funny, protective, and loyal. And everyone is going to fall in love with him!

“My threat to her livelihood hadn’t done a goddamn thing except turn us both on. Was she ever going to back down?”

This plot was perfectly planned out and had so many pieces floating around that somehow fit together perfectly in the end. You get a murder investigation, a love story, family drama, and the story that could make a career.

“‘Are you really that afraid I’ll find something?’ ‘Yes.’ My answer—and the truth in that single word—caught her off guard.”

This was one of my most anticipated releases this year and I am counting down the days until Riven Knight releases. Do yourself a favor and read it because this book has a little bit in it for everyone.