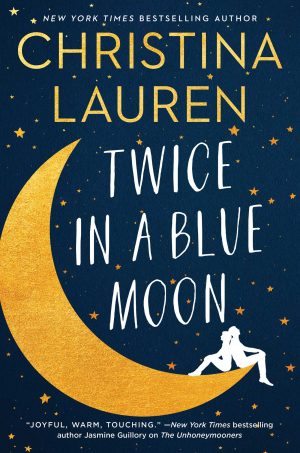 Sam Brandis was Tate Jones’s first: Her first love. Her first everything. Including her first heartbreak.

During a whirlwind two-week vacation abroad, Sam and Tate fell for each other in only the way that first loves do: sharing all of their hopes, dreams, and deepest secrets along the way. Sam was the first, and only, person that Tate—the long-lost daughter of one of the world’s biggest film stars—ever revealed her identity to. So when it became clear her trust was misplaced, her world shattered for good.

Fourteen years later, Tate, now an up-and-coming actress, only thinks about her first love every once in a blue moon. When she steps onto the set of her first big break, he’s the last person she expects to see. Yet here Sam is, the same charming, confident man she knew, but even more alluring than she remembered. Forced to confront the man who betrayed her, Tate must ask herself if it’s possible to do the wrong thing for the right reason… and whether “once in a lifetime” can come around twice.

Whenever the name Christina Lauren shows up our available ARC’s list, I request the book – no hesitation. Their particular brand of romance simply clicks with me, and let me tell you this one might be my favorite Christina Lauren book yet.

Twice in a Blue Moon is a beautifully written, well-paced second chance romance, riddled with gut-wrenching betrayal, angst, and impossible choices. What I loved about this book is that we don’t enter the story in the present time, and slowly unwrap the secrets around the main character’s heartbreak as we go, we actually get to experience the beginnings firsthand, live and in color.

Sam and Tate meet while on vacation in beautiful, beautiful London, each of them in the company of a grandparent, and as fate would have it, they’re also staying at the same hotel. While the oldies catch up on sleep, Sam and Tate spend their nights talking in the hotel garden, sharing well-kept secrets, stories, hidden kisses, and eventually, more. Christina and Lauren managed to capture the magic of their innocent and at the same time, incredibly deep love perfectly. I was swooning throughout the entire thing. Their time together, however, ends rather abruptly, when Tate’s true identity and whereabouts are leaked to the press, and Sam mysteriously disappears.

More than a decade later, the pair meets again on the set of Tate’s newest Hollywood project. Despite being intent on avoiding the hell out of Sam Brandis, Tate finds herself drawn to him, curious about the man he’s become and discovers that there might have been more to her unwilling exposure than she initially thought.

I loved how their relationship progresses slowly and hesitantly the second time around, for obvious reasons, and yet with the same inevitability as before. At the risk of sounding like a total cliché – they were simply meant to be together. #True love never dies.

All sorts of different secondary characters, grandma and her morals, the best friend who calls Sam the devil, Tate’s arrogant and self-serving father, as well as the story behind the movie, add a little something extra to the story, making this a light, fun and yet emotional read. I would definitely recommend this to anyone with a taste for good old contemporary romance.