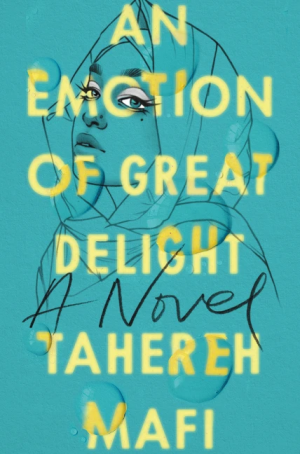 It's 2003, several months since the US officially declared war on Iraq, and the American political world has evolved. Tensions are high, hate crimes are on the rise, FBI agents are infiltrating local mosques, and the Muslim community is harassed and targeted more than ever. Shadi, who wears hijab, keeps her head down.
She's too busy drowning in her own troubles to find the time to deal with bigots.
Shadi is named for joy, but she's haunted by sorrow. Her brother is dead, her father is dying, her mother is falling apart, and her best friend has mysteriously dropped out of her life. And then, of course, there's the small matter of her heart--
It's broken.
Shadi tries to navigate her crumbling world by soldiering through, saying nothing. She devours her own pain, each day retreating farther and farther inside herself until finally, one day, everything changes.
She explodes.


I received this book for free from Publisher in exchange for an honest review. This does not affect my opinion of the book or the content of my review.

Tahereh Mafi was one of the first authors I read when falling in love with reading. Her Shatter Me series left me reeling at times, and it truly made me realize that one could feel extreme emotions while reading a book about characters that do not even exist.

So I was pretty disappointed when this book left me feeling empty.

All throughout the book, I kept waiting to feel some spark of connection with the story, to feel some despair for Shadi and her situation, and I just never did. It felt very hard to connect to the characters on a personal level, for me specifically. Maybe this is because I do not fully understand the extent of what Shadi is going through, as a white female who isn’t very religious and has not lost anyone close to me. But I think to be inclusive to an audience and to try to educate the uneducated about a situation that they may not fully understand, Mafi needed to make the book more approachable to the readers who need some extra help understanding the full extent of what is going on.

Despite this however, I do feel that I was able to learn a lot about the Muslim faith. I have not had much exposure to this religion, so it was very intriguing to get a look at it from the inside, even when it left me confused. I feel Mafi did a good job of not making the fact that Shadi is Muslim the only part of the story worth mentioning. I was able to connect to Shadi on the basis that high school can be hard, especially for those of us that feel outside of it all. I felt her struggles in that regard on a personal level, and that was the saving grace of the book, in my eyes.

Shadi was a relatable character in many ways. She struggled making friends, she didn’t have an easy home life, and her love life was nothing short of complicated. She was compatible with most teenage girls, while also being apart from some due to her Muslim beliefs. It makes the reader realize that everyone is a lot more similar than we all may think. However, the writing made me feel that a lot of Shadi’s problems, were created by Shadi herself. She could have improved the complicatedness of her love life, if she would have accepted what was being offered, or given a reason for why she wouldn’t do that. She could have accepted the kindness being offered to her by others and turned that into friendship. Instead, she often pushed people away, with little to no explanation given to them…or us as readers. We had very little insight into her actions and to me that made her seem like an irrational character who makes decisions on a whim and then blames the aftermath on everyone but herself.

I think this book was an interesting read, and a great way to work towards diversifying what you read. It offered enough about Muslim faith and culture, that I feel I was exposed to it in a way I have never had the chance to be exposed to it before, but it also makes you realize that everyone is relatable. Mafi did a good job of telling the story of Shadi and her family, I just think that something was missing throughout.

Hey everyone! I’m Gabrielle, a full time college student that tries to make sure I get reading time every day (even when I should be studying). I’m currently studying biochemistry and molecular biology, but am about to graduate so hopefully my days will soon be free for all the books I can dream of.

When I’m not reading or studying, I am usually binging a TV series and cross stitching, or playing video games (right now I’m on a Minecraft and Stardew Valley kick).

I hope my reviews help you find your next favorite book, and maybe even better, your next book boyfriend!