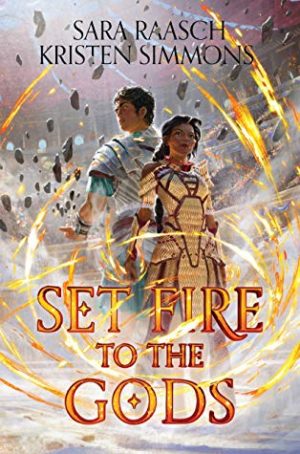 Ash is descended from a long line of gladiators, and she knows the brutal nature of war firsthand. But after her mother dies in an arena, she vows to avenge her by overthrowing her fire god, whose temper has stripped her country of its resources.

Madoc grew up fighting on the streets to pay his family's taxes. But he hides a dangerous secret: he doesn't have the earth god’s powers like his opponents. His elemental gift is something else—something that hasn't been seen in centuries.

When an attempted revenge plot goes dangerously wrong, Ash inadvertently throws the fire and earth gods into a conflict that can only be settled by deadly, lavish gladiator games. The fights put Madoc in Ash's path, and she realizes that his powers are the weapon her rebellion needs—but Madoc won’t jeopardize his family, regardless of how intrigued he is by the beautiful warrior.

But when the gods force Madoc’s hand, he and Ash uncover an ancient war that will threaten more than one immortal—it will unravel the world.

Gladiator meets the Last Airbender. Sarah Raasch & Kristen Simmon’s Set Fire to the Gods is a solid start into their eponymous new young adult fantasy series, in which gladiators settle wars between their gods in arena fights with elemental magic.

The sort of ancient greek slash roman world-building drew me in from the get-go. I absolutely love mythology and anything to do with gods, so this one was right up my alley. It kind of reminds me of the whole Titan and Greek gods thing. In this world, everyone is descended from one of the six gods, and a person’s heritage determines the kind of elemental Divinity they have. Then there are the ones who do not have any sort of Divinity – the Undivine.

We’re led through the story by our main characters Ash, a gladiator for the “Fire God,” and Madoc, who landed in the mids of this war purely by accident. Or so he believes. While I didn’t feel a deep connection to either of the characters, they’re decently developed, and I enjoyed getting the chance to look at both sides of the story. Initially, both have their own agendas and separate goals. For Ash, it’s justice; for Madoc, it’s much more straightforward – survival. Eventually, their interests align in more ways than one, and they end up working together.

We dive into the story with full-speed. Hearts racing during the first fights, anxiously waiting for developments of the imminent war between Ash and Madoc’s gods. The minimal number of actual gladiator fights in this one is the one thing I’m a bit bummed about, I expected a bit more action-packed fights considering the world set-up. And more rivalry between the main characters, at least in the beginning. The plot itself was a bit predictable, I figured out Madoc’s heritage and Divinity in the very beginning, and I figured out who’s the bad guy equally fast. We lost a lot of momentum the further we got into the story, but overall it’s a nice, action-packed, magic-filled read that will definitely satisfy your Gladiator cravings.

From what I can tell, opinions on this vary greatly, so if you do end up reading it, I’d love to know what you think.