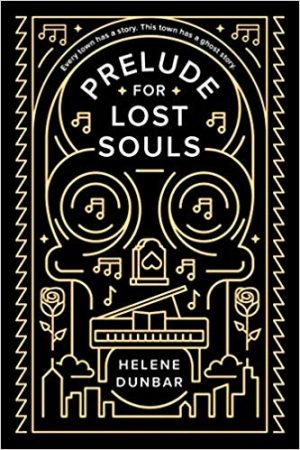 For readers of Nova Ren Suma, Maggie Steifvater, and Maureen Johnson comes a spellbinding tale about choosing your own path, the families we create for ourselves, and facing the ghosts of your past.

In the town of St. Hilaire, most make their living by talking to the dead. In the summer, the town gates open to tourists seeking answers while all activity is controlled by The Guild, a sinister ruling body that sees everything.

Dec Hampton has lived there his entire life, but ever since his parents died, he's been done with it. He knows he has to leave before anyone has a chance to stop him.

His best friend Russ won't be surprised when Dec leaves—but he will be heartbroken. Russ is a good medium, maybe even a great one. He's made sacrifices for his gift and will do whatever he can to gain entry to The Guild, even embracing dark forces and contacting the most elusive ghost in town.

But when the train of Annie Krylova, the piano prodigy whose music has been Dec's main source of solace, breaks down outside of town, it sets off an unexpected chain of events. And in St. Hilaire, there are no such things as coincidences.

St. Hilaire is a small town in New York filled with people who make their living by talking to the dead. During the summers, the town opens its gates to the public and tourists searching for answers or salvation. In this town, things don’t simply happen. When Russian piano prodigy Anastasia Krylova unexpectedly stumbles into town at the end of the tourist season, it’s more than a coincidence.

I’m usually wary of picking up these kinds of stories because, in my experience, I either love them or I don’t like them at all. Still, something about Helen Dunbar’s Prelude of Lost Souls intrigued me, so I decided to give it a try. The idea behind the story itself is great. I really liked the idea of this diverse set of characters coming together for this sort of higher purpose while fighting the corrupt authority in town, accompanied by the spirits of their ancestors (at least that’s what I imagined when I read the synopsis). Unfortunately, things didn’t work out that way.

I had a hard time finding into the story and struggled even more with connecting to the characters. Five chapters in, I was already praying for things to finally happen. I was hopeful that things would get better once Annie arrived in St. Hilaire, but that, unfortunately, wasn’t the case. We have this exciting story and secrets and dead people trying to help from the other side for God’s sake, but instead of fast-paced, thrilling dark fantasy book vibes, I got mild contained curiosity.

While I appreciated the multiple points of view in this one, I sometimes had trouble following the events because the perspectives change so frequently and suddenly. At times I missed it and was like, wait a minute that can’t be Annie anymore. And that only shows me that I wasn’t paying as much attention as I should have been. The most interesting character for me was the best friend, Russ. He’s sort at the center of the story more than the two main characters as he’s the one primarily uncovering the secrets and the circumstances leading to Dec’s parents’ death. Towards the end, things got a bit more interesting, and there’s sort of an introduction to the sequel that tells you there’s going to be more. So, the action part of the whole thing is probably in there, hopefully.

I will definitely check out the sequel because I’m curious about Russ’ further development and his story, but this first book wasn’t quite my cup of tea. The story has a lot of potential and I hope it sequel will live up to that more than the first one did.