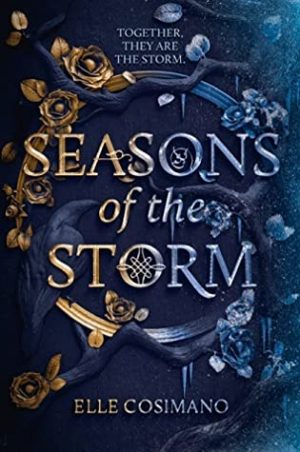 One cold, crisp night, Jack Sommers was faced with a choice—live forever according to the ancient, magical rules of Gaia, or die.

Jack chose to live, and in exchange, he became a Winter—an immortal physical embodiment of the season on Earth. Every year, he must hunt the Season who comes before him. Summer kills Spring. Autumn kills Summer. Winter kills Autumn. And Spring kills Winter.

Jack and Fleur, a Winter and a Spring, fall for each other against all odds. To be together, they’ll have to escape the cycle that’s been forcing them apart. But their creator won’t let them go without a fight.

Seasons of the Storm is a unique, exciting, and action-packed tale about personified seasons, starcrossed lovers, and the power of friendship. I went into this book knowing the bare minimum but loved the idea of personified seasons, and each respective season killing their predecessor each year form the get-go. Throw forbidden romance in there, and I’m game.

The first few chapters drew me in immediately. I’ve never read a book built around personified seasons before and was curious how Elle would execute it. It wasn’t really what I expected, considering the mythology the story’s built around, but the modern twist was interesting none the less. We dive into the story when Jack, our male lead, dies and ultimately becomes a Winter. We get the bare minimum of information on how all this works; we know next to nothing. While utterly frustrating, it’s also why I devoured the first half in one go.

Fast-forward about thirty years; we stumble upon your first season change between Jack and his spring, Fleur. Over the past years, Fleur’s become more reluctant to kill him, and Jack desperately wants more time with the spring he’s fallen in love with despite all odds. How they fell for each other, given the circumstances, unfortunately, remains a mystery. I would have loved to explore the beginning of their relationship, maybe in the form of flashbacks as we went along. Their feelings for each other, the mysterious circumstances of said season change, and an imminent threat to Fleur’s life is eventually what spurs Jack into action.

The chapters until the group’s grand escape were a bit slow for me personally, but the story continuously picked up speed the farther they got from home. While I made no deep connections with either of the main characters, I still cared about their journey and was beyond curious how things would turn out. It was less being part of the journey, but watching from the outside for me. I’m hoping I’ll find my way to them more in the next book. Considering the epic love story the synopsis makes it out to be, I’m a bit disappointed in the romance element. It’s there, adorable and somewhat deep, but I had hoped for an earth-shattering forbidden love.

The ending was a bit too fast-paced for my taste, and a significant part of the entire world-construct, unfortunately, remained hidden or unsolved, making the whole thing a bit shaky and unstable, in my opinion. Still, all in all, I’m quite happy with the overall plot development and the ending.

Long story short, I really enjoyed the book and am curious to see where the rest of the series takes us. I imagine it’s not everyone’s cup of tea, but books are not one size fits all, right? If it sounds interesting to you, I recommend giving it a try.