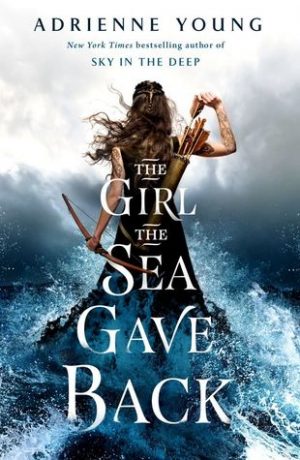 The new gut-wrenching epic from the New York Times bestselling author of Sky in the Deep.

For as long as she can remember, Tova has lived among the Svell, the people who found her washed ashore as a child and use her for her gift as a Truthtongue. Her own home and clan are long-faded memories, but the sacred symbols and staves inked over every inch of her skin mark her as one who can cast the rune stones and see into the future. She has found a fragile place among those who fear her, but when two clans to the east bury their age-old blood feud and join together as one, her world is dangerously close to collapse.

For the first time in generations, the leaders of the Svell are divided. Should they maintain peace or go to war with the allied clans to protect their newfound power? And when their chieftain looks to Tova to cast the stones, she sets into motion a series of events that will not only change the landscape of the mainland forever but will give her something she believed she could never have again—a home.

What drew me in about this book was for one the absolutely gorgeous cover, and then, of course, a girl with mysterious markings and abilities, gods, fate, and war? Count me in. I was beyond excited about the opportunity to read it.

With the Girl the Sea Gave Back New York Times bestselling author Adrienne Young sweeps you off into a beautifully built, long-forgotten world, with intriguing legends and strong characters, that make you wish there was a way to climb inside the book.

“I didn’t ask why they needed me. It didn’t matter. I was a Truthtongue, and as long as the Svell gave me a home and let me live, I did their bidding with the three spinners.”

The moment Tova washed ashore on Svell territory with no real memory of the circumstances that brought her there, I wanted to know more. I was utterly enthralled, and I needed answers. After the initial chapters, however, I began to lose some of my previous enthusiasm and excitement.

After more than a good third of the book, we had barely moved along in the story, and I kept waiting for the main characters to meet, who you’ve been following separately so far. I understand that the lengthy introduction was meant to explain Tova’s abilities and her past as well as Halvard’s, but for me, it still took away a bit from the overall reading experience. Despite all this, the desire to know what happens to Tova and Halvard carried me through the dry spell.

When the main characters finally meet in a whirlwind of fighting and blood, the events began overturning themselves. I was beyond relieved that something was finally happening, and once we crossed that threshold, I could not put the book down. The fact that I had to get up early the next morning did nothing to stop me.

“Sometimes fate was a tangled knot. Sometimes it was a noose. Or a net. But sometimes, it was the rope that pulled you from the sinking deep.“

I was a bit disappointed that there was very little going on in terms of romance between Tova and Halvard. If that’s your main interest in the book, this one’s not for you. Also, once I started to really find myself in the story, hanging on every word, the book ended rather abruptly. I kept looking at the progress line on my kindle, thinking: what do you mean there’s only a couple of chapters left?

To cut a long story short, while I feel that the book did not reach its entire potential in terms of the story itself, I loved the characters and their mesmerizing world full of fighting and Norse gods. I’d recommend the book to anyone who loves an action-packed story with all the fighting and blood that comes with it. And if there’s there going to be a sequel, I’d still read it, because I’m beyond curious about what’s going to happen to the characters, especially Tova and Halvard.