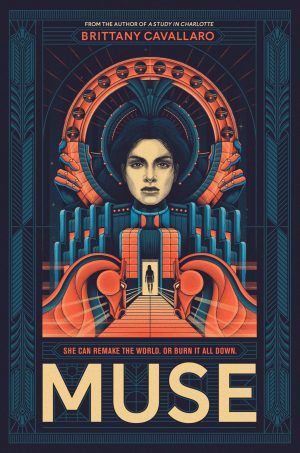 American Royals meets The Winner’s Curse in the first book of bestselling author Brittany Cavallaro’s new duology, set in an alternate history American monarchy where a girl grapples for control of her own life in the middle of a looming war.

The year is 1893, and war is brewing in the First American Kingdom. But Claire Emerson has a bigger problem. While her father prepares to reveal the mighty weapon he’s created to showcase the might of their province, St. Cloud, in the World’s Fair, Claire is crafting a plan to escape.

Claire’s father is a sought-after inventor, but he believes his genius is a gift, granted to him by his daughter’s touch. He’s kept Claire under his control for years. As St. Cloud prepares for war, Claire plans to claim her life for herself, even as her best friend, Beatrix, tries to convince her to stay and help with the growing resistance movement that wants to see a woman on the throne. At any cost.

When her father’s weapon fails to fire on the fair’s opening day, Claire is taken captive by Governor Remy Duchamp, St. Cloud’s young, untried ruler. Remy believes that Claire’s touch bestows graces he’s never had, and with his governing power weakening and many political rivals planning his demise, Claire might be his only and best ally. But the last thing that Claire has ever wanted is to be someone else’s muse. Still, affections can change as quickly as the winds of war. And Claire has a choice to make: Will she quietly remake her world from the shadows—or bring it down in flames?

The premise of this story is unique. Imagine a world where George Washington decided to become a king and re-establish the monarchy in America. It’s 1893, war is on the horizon for those in the First American Kingdom. War, however, is the least of Claire Emerson’s worries. Her top priority is finding a way to escape her father, an inventor who has gone mad. Her father believes Claire can make his dreams and inventions a success through her touch and blessing. As a result of this, he keeps her close by at all times. He also blames her if anything ever goes amiss with his inventions.

Her father is progressively getting worse as the World Fair’s opening gets closer. He is to debut a revolutionary weapon at the fair, and he needs Claire to ensure it is successful. Long story short, things don’t go the way her father had planned. And Claire’s escape plan is ruined when the Governor takes her captive due to his curiosity about her abilities.

Okay, I’m going to be brutally honest here: I didn’t love this story, nor did I hate it. I feel indifferent towards it. I love the central idea for this book; the execution fell a bit flat for me. It was hard for me to feel a connection with the characters. It was also hard for me to root for the romance; it didn’t feel organic or realistic. Instead, the romance felt like a plot device the author was using to move the plot forward. That being said, I plan on checking out the sequel when it comes out. I’m curious to see what the author has in store for the characters.

Overall, I found this story to be interesting. I love the way the author incorporated women’s rights into this book. Claire and her friend, Beatrix, both want more out of their lives than what is allowed for women in 1839. It was nice to see Claire grow and become more outspoken about what she wanted for her life. If you’re a fan of history, then I think you should definitely check out this book! I’d love to hear your thoughts on the author’s reimagined version of America.