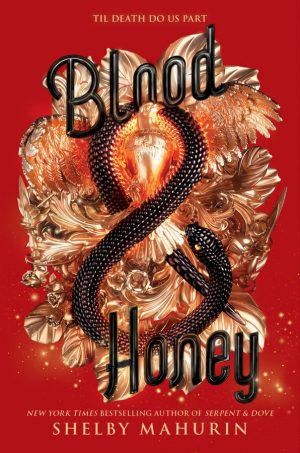 The hotly anticipated sequel to the New York Times and IndieBound bestseller Serpent & Dove—packed with even steamier romance and darker magic—is perfect for fans of Sarah J. Maas.

After narrowly escaping death at the hands of the Dames Blanches, Lou, Reid, Coco, and Ansel are on the run from coven, kingdom, and church—fugitives with nowhere to hide.

To elude the scores of witches and throngs of chasseurs at their heels, Lou and Reid need allies. Strong ones. But protection comes at a price, and the group is forced to embark on separate quests to build their forces. As Lou and Reid try to close the widening rift between them, the dastardly Morgane baits them in a lethal game of cat and mouse that threatens to destroy something worth more than any coven.

Shelby Mahurin’s Serpent & Dove was one of my favorite books in 2019, and hands down one of the best debuts I had read in a long time. Naturally, reading the sequel was a no brainer, and all I can say is get ready folks!

Shelby once again managed to completely pull me into her world of Dames Blanches, Dames Rouges, and Chasseurs and quite literally enchanted me with her writing. We pick up exactly where we left off at the end of Serpent & Dove, if you have not read that one yet, please do that before reading this review – it contains spoilers for the first book.

“I’d lied when I’d said I’d made my choice. In truth, there’d been no choice at all. There never had been. I loved her. And if I had to run, hide, and fight for that love, I would. For the rest of my life, I would.”

I have to admit that it took me a while to get back into the story, longer than I thought it would, considering how much I loved the first one, but once I was there, things were good. There’s not a lot rehashing of the first book’s events, so I’d probably recommend doing a re-read before diving into this one if you feel you’re missing parts, and it’s been a while since you read Serpent & Dove.

Blood & Honey is told from both perspectives, like the last one, which I love. I honestly wish more books were written in dual point-of-view. The first couple of chapters were a bit slow, there’s not much action, and Shelby’s instead setting the emotional stage for the book. But I sort of didn’t really mind that. A lot has happened, things have changed, and especially Reid struggles with his newfound powers, so I appreciated getting the raw emotional material.

The gang is now on the run, hiding from the Chasseurs, Lou’s mother, and on a quest to find allies, even unlikely ones. It takes quite a while for the story to pick up the pace – a massive part of it is dedicated to assembling the team and focused on the repercussions of Lou using her magic, and how it changes her relationship with Reid. Reid, on the other hand, fears losing Lou to her magic. As nature demands balance, she gives pieces of herself away in her quest to defeat her mother, pieces that he wants for himself. At the same time, Reid struggles with accepting his magical heritage and reconciling said legacy with the beliefs he’s held close his entire life.

I honestly feared for my ship in these turbulent waters for quite a while, but I thought it was beautifully written. They love each other, no doubt about that, but sometimes things aren’t that simple. Lou thinks she knows best and obviously wants the best for Reid, and vice versa. It was frustrating, at times annoying, and thrilling at the same time if that makes sense? It felt real, though. That said, character development on point.

Past the three-quarters mark, we gradually collect momentum for the grand finale. Despite the slow-burn, Shelby managed to keep me on my toes throughout the entire thing, especially with Morgane’s riddles and mind-games as we try to figure out her actual endgame. A diverse set of secondary characters, both new and old, add spice to the story (even the creepy ones – you’ll see). We learn about Coco’s origins when her coven joins the fight, and we have additional mythical elements with the loup-garou. I was actually familiar with the French legend la Bête de Gévaudan, so I had a lot of fun with that, even if the pack sort of remains a mystery.

All in all, I can say it did not capture me the way the first one did as we spent the majority of the book in this sort of the calm before the storm, but it’s still a solid sequel to Serpent & Dove; with a massive cliffhanger, though, so brace yourselves. The last chapter definitely makes hungry for the final book in the series.

If you liked the first one, I’d definitely recommend following the story further. From what I can tell, opinions on this one vary greatly, so if you do end up reading it, let me know what you thought in the comments.