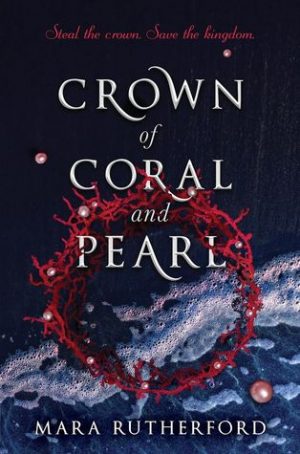 For generations, the princes of Ilara have married the most beautiful maidens from the ocean village of Varenia. But though every girl longs to be chosen as the next princess, the cost of becoming royalty is higher than any of them could ever imagine…

Nor once dreamed of seeing the wondrous wealth and beauty of Ilara, the kingdom that’s ruled her village for as long as anyone can remember. But when a childhood accident left her with a permanent scar, it became clear that her identical twin sister, Zadie, would likely be chosen to marry the Crown Prince—while Nor remained behind, unable to ever set foot on land.

Then Zadie is gravely injured, and Nor is sent to Ilara in her place. To Nor’s dismay, her future husband, Prince Ceren, is as forbidding and cold as his home—a castle carved into a mountain and devoid of sunlight. And as she grows closer to Ceren’s brother, the charming Prince Talin, Nor uncovers startling truths about a failing royal bloodline, a murdered queen… and a plot to destroy the home she was once so eager to leave.

In order to save her people, Nor must learn to negotiate the treacherous protocols of a court where lies reign and obsession rules. But discovering her own formidable strength may be the one move that costs her everything: the crown, Varenia and Zadie.

Crown of Coral and Pearl is one of the best fantasy debuts I’ve read in 2019. While it didn’t knock Shelby Mahurin’s Serpent & Dove off my number one spot (if you haven’t read that one yet go read it), it’s a close second. Kiera Cass’ the Selection meets Holly Black’s the Cruel Prince – get ready folks.

Every few generations, the elders select the most beautiful girl in Varenia to wed the Crown Prince of Ilara. Nor grew up fantasizing about being chosen, feeling suffocated by her mother’s expectations, and the fear of never leaving Varenia. But it can never be her. After a childhood accident nullifies any chance of Nor being selected, her twin sister Zadie becomes the obvious choice. We dive into the story days before “the ceremony,” and from here on out, follow the events from Nor’s point of view.

From the moment I met Nor and Zadie, I was enthralled by their relationship. Despite their similarities lookswise, their characters couldn’t be more different. Whereas Zadie is the softer of the two, more sheltered and maybe a bit naive at first, Nor is the adventurous and curious one. It’s evident from the beginning that neither can imagine life without the other, despite their looming separation. Their love for each other knows no bounds and said love is also how Nor ends up on the boat to the castle instead of Zadie. Despite their close relationship, each character grows and develops on their own, in their own way, making their relationship all the more real and special to me. Two sides of the same coin – the same and yet different.

Once Nor arrives at the castle disguised as her twin sister, and meets her betrothed Prince Ceren, she quickly realizes that nothing she’s been told is the truth. On a mission to uncover the crown’s secrets, Nor stumbles over the story of a long-forgotten queen, forms unlikely alliances, and eventually discovers a plot that would mean the end of her people. Determined to fight for the home she initially desperately wanted to leave behind, she plays the games of the court, always one step away from being discovered.

“Both precious to our people, both beautiful enough to adorn the necks of queens. But whereas a pearl is prized for its luster, its shape, its lack of imperfections, coral is different. It grows twisted. In its natural form, it can hardly be considered beautiful at all.“

While the elements to the story: magic, court politics, lies, secrets, scheming, and forbidden romance, are nothing new, Mara Rutherford managed to spin said elements into a thrilling tale that kept me glued to my kindle for hours at a time. In Prince Ceren, we have the ultimate villain – cold, calculating, cruel. He’s one of the darker characters I’ve read this year, but that’s what makes his character so intriguing. I believe the best villains are the ones with backstories that almost make you feel for them. I had a lot of fun with this character.

The romance element, while fascinating due to its forbidden nature, lacked a bit of depth and substance, but fit the storyline otherwise. Talin sort of becomes Nor’s light in the dark cold mountain castle – naturally, she’s drawn to him, and they fall in love. At times, it seemed like its more about what Talin represents for Nor, and the fact that he’s interested in her despite her scar than him as a person. We don’t really get to know him that well as a character, so there’s definitely room for development. I’m looking forward to seeing where the sequel will take these two.

Long story short, this a well-rounded story with excellent world-building and interesting characters. The plot is a bit predictable here and there, but otherwise, I enjoyed this one. If young adult fantasy is your thing – give it a go.