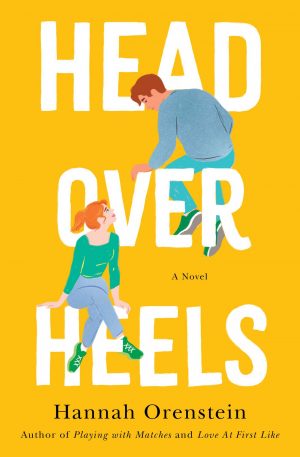 The past seven years have been hard on Avery Abrams: After training her entire life to make the Olympic gymnastics team, a disastrous performance ended her athletic career for good. Her best friend and teammate, Jasmine, went on to become an Olympic champion, then committed the ultimate betrayal by marrying their emotionally abusive coach, Dimitri.

Now, reeling from a breakup with her football star boyfriend, Avery returns to her Massachusetts hometown, where new coach Ryan asks her to help him train a promising young gymnast with Olympic aspirations. Despite her misgivings and worries about the memories it will evoke, Avery agrees. Back in the gym, she’s surprised to find sparks flying with Ryan. But when a shocking scandal in the gymnastics world breaks, it has shattering effects not only for the sport but also for Avery and her old friend Jasmine.

When Avery’s life-long dream is blown to smithereens during her Olympic trials because of a tragic knee injury she has a hard time recovering. While she eventually heals physically, the emotional scars run deep. Fast-forward almost a decade, her life looks nothing like she thought it would. Instead, it’s her former best friend living the life she always envisioned for herself.

What drew me in with this book was that, for once, it’s not about the long way to the dream, the ups and downs, and the happy ending, but about what happens when things go wrong. What happens when life pulls out the rug from under your feet, leaving you reeling. I love Avery’s character. She feels authentic, and real and has an emotional depth I was missing in a lot of books I recently read.

Defeated and with a bruised ego, she returns home after her boyfriend breaks up with her. While she definitely has a bit of a meltdown at first, she then grabs the opportunity to turn her life around with both hands. To Avery’s surprise, returning to the world of gymnastics does not mean endless pain and suffering over what almost had and lost but turns out to be her salvation.

Her male counterpart, Ryan, is a former Olympian himself. While he genuinely seems to be a good guy, and I really liked their relationship at the beginning with the teasing and playful banter, there were moments I seriously wanted to throttle him. We all make mistakes, but that – I don’t even know. I won’t spoil the fun, though; you’ll see what I’m talking about. He slowly – very slowly – made his way back into my good graces towards the end, though.

What I ultimately liked about their relationship is that it highlights the importance of common ground. Avery and Ryan respect and understand each other, and that eventually turns into more. It’s not always opposites attract, but like calls to like.

As for the plot – it was pretty standard. I guessed almost the entire thing based on the synopsis alone. It was pretty obvious where the story was going. While I sort of expected it, I was still a bit disappointed. Don’t get me wrong it’s a sweet, lightweight sports romance, and I really liked how it ended, but sometimes I was like: of course, that is what’s happening now. If I’m honest, Avery’s journey was more exciting to me than the romance element. It says it’s alright to fall apart, life is messy sometimes, and you’ll eventually find your way no matter what.

All in all, it’s a nice and quick read and was a change of scenery from my usual hockey and football sports romances. If sports romance is your thing – this one’s for you.