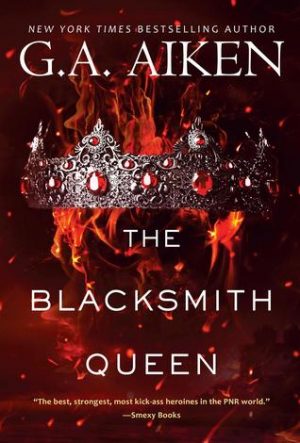 When a prophesy brings war to the Land of the Black Hills, Keeley Smythe must join forces with a clan of mountain warriors who are really centaurs in a thrilling new fantasy romance series from New York Times bestselling author G.A. Aiken.

The Old King Is Dead.

With the demise of the Old King, there’s a prophesy that a queen will ascend to the throne of the Black Hills. Bad news for the king’s sons, who are prepared to defend their birthright against all comers. But for blacksmith Keeley Smythe, war is great for business. Until it looks like the chosen queen will be Beatrix, her younger sister. Now it’s all Keeley can do to protect her family from the enraged royals.

Luckily, Keeley doesn’t have to fight alone. Because thundering to her aid comes a clan of kilt-wearing mountain warriors called the Amichai. Not the most socially adept group, but soldiers have never bothered Keeley, and rough, gruff Caid, actually seems to respect her. A good thing because the fierce warrior will be by her side for a much longer ride than any prophesy ever envisioned …

So here’s the thing: when I first read the synopsis for this book I was so damn excited to read it. Strong female characters, magic, kilt-wearing warriors, backstabbing, prophecies, and war. Sounds like the perfect recipe for a new high fantasy series, right? And yet, this one didn’t do it for me at all.

The story had so much potential; a strong female lead, driven by the desire to protect her family, stumbles into the middle of the war raging over her homeland due to some prophecy revealing that her sister is to be the next queen. Despite initially never wanting any part in this war except for forging weapons, Keeley sets off on this journey, accompanied by a group of Amichai warriors and along the way finds her own destiny and role in this war.

While this sounds good in theory, in my opinion, the execution was a bit weak. The plot was highly predictable, the plot twists weren’t really shocking, and the world-building was lacking for me as well. We have all these different players: humans, war monks, witches, centaurs, elves, dwarves, barbarians, and dragons. Still, we know next to nothing about some of these groups, because brief run-ins with the gang are all we get. There is no real storytelling, mostly dialogue. And the bad guy is the bad guy because they were born this way? Void of emotions and power-hungry?

I adored the main female characters in this one, and their relationship brought the playful banter and fun to the group, but that’s about it. The romance element fell entirely flat for me. While it was present, there wasn’t much to it: they meet, there’s interest, and suddenly they’re sleeping together and in love? The male point of view was a bit more detailed, and you can see the development. On Keeley’s side – not so much. For me, the romance doesn’t have to be the main focus, especially in sci-fi and fantasy, but it has to have some relevance and be, I don’t know, real.

To cut a long story short, I really wanted to like this book, but for all the reasons mentioned above I didn’t. I believe the writing style could also have something to do with this; it simply didn’t work for me. I’m sure for someone else it might. And then, of course, having read my fair share of mind-blowing fantasy series’, I might also be a bit biased.

If you’re interested in fantasy – give it a try. Maybe it works better for you than it did for me.