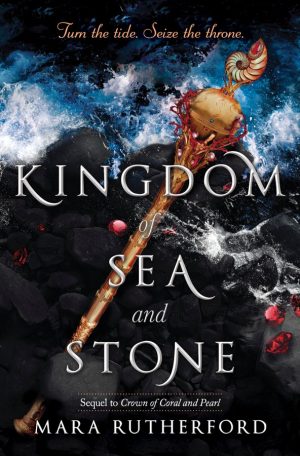 Ever since Nor was forced to go to a nearby kingdom in her sister’s place, she’s wanted nothing more than to return to the place and people she loves. But when her wish comes true, she soon finds herself cast out from both worlds, with a war on the horizon.

As an old enemy resurfaces more powerful than ever, Nor will have to keep the kingdom from falling apart with the help of Prince Talin and Nor’s twin sister, Zadie. There are forces within the world more mysterious than any of them ever guessed—and they’ll need to stay alive long enough to conquer them…

Kingdom of Sea and Stone picks up right where it’s predecessor, Crown of Coral and Pearl left off, so if you haven’t read this one – abort mission. This review contains spoilers for the first book.

After Nor’s daring escape from New Castle, she returns home to Varenia, hopeful that this is the end of it and, in a way, a new beginning. When Talin unexpectedly arrives in Varenia with not-so-great-news, Nor and Zadie set out to find Samiel and bring peace to Ilara once and for all. The world-building continues to be impressive and rich in detail. Talin’s quest to find allies takes us all over the place, meaning we get so see a lot more than just Varenia and New Castle.

As for the characters: Nor has always been the adventures one, but a full-blown war isn’t exactly what she had in mind. She definitely rises to the occasion, though, and pushes her inner-warrior to the surface. Her emotional journey is intriguing and refreshing. She’s becoming this confident, independent woman, and at the same time, still struggles with what she wants for herself once this is all over. Her twin sister Zadie has a few moments, but apart from those, remains the quiet, sheltered character we met in the first book. Their sister bond, however, is now stronger and ever and so beautiful. It’s fascinating. I’m a twin, and we have nothing that comes even close to that.

We also get to know Talin more as a character in this one, and I have to say I really appreciated how he handles the situation with Nor. In my head, he’s the grown-up in all of this. He’s patient, sometimes to a fault, considerate, and always aware of Nor’s emotional struggle. I had a few issues with the relationship with his mother, though. He hasn’t seen her in years and has this blind trust in her that had me worried for a minute or two. She’s not who he remembers and how he described her to Nor, but he can’t see that.

Unfortunately, the romance element was still severely lacking for me, despite Talin’s apparent commitment to their relationship. I simply felt that it didn’t have any depth and substance, and Nor wasn’t nearly as committed to the relationship. I love a good romance to go with my fantasy. It doesn’t have to be the main focus, but I do need it. In the beginning, there were a lot of lingering looks and touches and kisses, and I was so happy about that, thinking this would finally go somewhere and develop realistically, but no.

Plot-wise the story was good. It was well-paced for the most part, laced with equal amounts of action, world- and character-building. The villain wasn’t anything new and, therefore, a bit predictable. We still love to hate him, but the same as last time, you also kind of feel bad for the poor kid. A diverse set of new secondary characters bring the little extra to the story. I adore Roan (you’ll see why). He’s fierce and sassy and loyal. At times, I kind of wanted Nor to start something with him because I felt something was missing with Talin from her side. I’m usually not a big fan of changing love interests in a series, but I think she could have found herself and what she really wanted in life with him. The ending wasn’t my thing. It felt incomplete and, at the same time, loaded with unnecessary action. I understand the approach and sort of the lesson behind it, but I’ve never been a fan of open endings.

So long story short, it wasn’t as good I had hoped, and not exactly what I had in mind in terms of romance, but still a solid conclusion to the series.