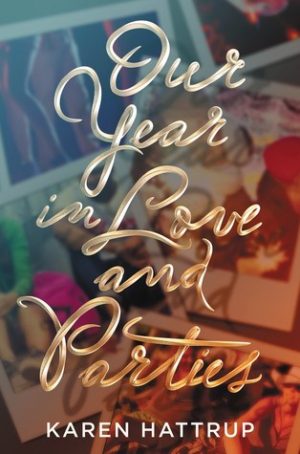 Tucker knows that some relationships take work. With his best friend, Bobby, and his mom, everything is simple, steady. His dad, on the other hand, seems to only show up when he wants to bring Tucker down. Then there’s Erika Green, who comes back into his life, stirring up old feelings. A small part of him knows he shouldn’t get too attached during senior year. But a bigger part doesn’t want her to disappear again.

Erika from before the video loved to shock people. Now, she just wants to hole up in her quiet college life and leave the past where it belongs—in a dumpster fire. But then she reconnects with Tucker Campanelli. Erika can’t explain what it is about him. There’s just this undeniable connection between them, and she really doesn’t want to lose that feeling. Not yet.

Okay okay, you probably want to know WHY I loved this book, the entire point of the review.

So let’s break it down.

In the book, we have our two main characters: Tucker and Erika. Now, there is a small age difference (teeny-tiny), but Erika is older than Tucker by two years. He is going into his senior year of high school and she is going into her sophomore year of college.

I was into it.

I am so used to reading stories where the guy is older and “more mature” (hehe), but with Erika being in college and having gone through a lot back in high school (more about that in the plot), the ability to be in her mindset was one of the best parts about the book. It felt refreshing and seeing how her path changes throughout the time-lapses we’re given, it just tugs at my heart and helped me connect to her character in a way I haven’t before.

I can also say I loved Tucker’s character. With him being a senior he felt more childlike and innocent, and I loved it. The struggles he has to deal with internally, especially about his father and the way he grows and deals with them made them feel realistic in a whole new way. I loved being put in a world where a young man is being told that it’s okay to not want to be what society deems as “manly”. That it is perfectly okay to be okay with crying and to still deal with the hardships of growing up feeling broken and not enough in a way that felt so raw and realistic. I honestly just wanted to hold tucker 99.99% of the time and tell him everything would be alright.

Now that we’ve talked about the characters separately, let’s talk about them together!!

I was at first iffy about the romance, I truly wondered how these two characters that were leading different lifestyles would connect. That’s where the parties came in; an aspect of the book that made it SOOOO unique and even more amazing. Each party highlighted a change in the characters and they were put in so smoothly and they each held their own. Whether Tucker and Erika hadn’t seen each other in months or years. The parties made me want to party with the characters and it brought me so much joy to see how Tucker and Erika would interact at each of them. I could go on-and-on about how much I loved each party but I would say to read the book yourself and come back and let me know which one was your favorite and why because they’re just that good and I can’t even use enough words to explain what it was like reading those scenes and feeling so in the moment. Truly a masterpiece. I need you to feel what I’m talking about because it’s just something that is all at that moment, and Hattrup captures it so beautifully. UGGHHH

I have two favorite parties from the book that I’m stuck between, they were so beautifully written and they had me laughing and crying all at once.

Also, the chemistry between the characters felt so realistic and raw. It felt as if this story could happen to anyone, but it wasn’t as cliche-filled as I had thought it would be, and I’m so grateful and happy about that.

For the overall plot, like I’ve said a million times before, Tucker and Erika were unique characters. They brought stories that I fell in love with, and the obstacles they faced made me connect to them unlike any character I’ve connected to before. Especially for a contemporary YA book. We were given so many emotions through Tucker’s perspective and his obstacles of having to deal with his broken relationship with his father, trying to find a place in the world where he fits, juggling his emotions and trying to see which one’s were acceptable and which one’s weren’t had me right beside him wanting to hold his hand.

And this held true for Erika as well. She was such a strong character in dealing with trust that had been broken in the past and its after-effects, along with being slut-shamed and being labeled as one thing when she was so much more. Erika grew and continued to grow into what it means to be an independent woman and fight against slut-shaming, changing the world’s view on a girls’ sexuality. And it just made me love her character SO MUCH. She faced so many obstacles and I was just in the background cheering her on, and wanting to protect her at ALL costs.

I could continue writing amazing things about this book but at the end of the day…I just have to say that you absolutely need to experience this book for yourself and read it and treasure it for the rest of your life. You will NOT regret it!!