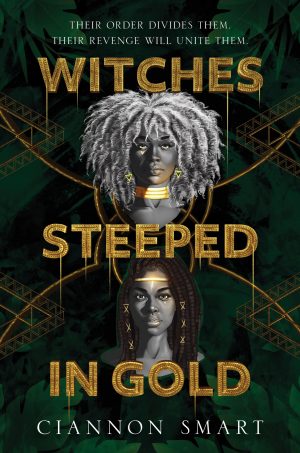 Iraya has spent her life in a cell, but every day brings her closer to freedom - and vengeance.

Jazmyne is the Queen’s daughter, but unlike her sister before her, she has no intention of dying to strengthen her mother’s power.

Sworn enemies, these two witches enter a precarious alliance to take down a mutual threat. But power is intoxicating, revenge is a bloody pursuit, and nothing is certain - except the lengths they will go to win this game.

Can I say, this book was a love triangle of betrayals. The book was magical and Smart has an absolutely lovely way with words.

Before I dive into my thoughts, one thing I want to mention is that if you have trouble following time jumps without labels, this book may be challenging at times, as unexplained amounts of times sometimes pass. This left me feeling lost every now and then, feeling like I was missing key parts of the story, when in actuality, it was just the natural passing of time.

Overall, I was very pleased by this book. I went in without too many expectations and Smart really blew me away. Ira and Jazmyne were two opposite but beautifully written badass females. To get one character like that in a book is a feat within itself. To get two? That’s a rare occurrence in my opinion.

The story arcs of both women went in directions that I did not see coming. Jaz started off as a character I thought was going to do great things. And I still think that, don’t get me wrong, but I feel like there needs to be a bit of a redemption arc in book two for it to happen. It seemed the obvious path at the start of the book, the easy path for her to traverse. Now that path is twisted and littered with adversaries that came out of nowhere. She is strong enough to face it but the question is: does she want to?

Ira on the other hand, had to work her way up from the bottom. She was not given an easy path, and she never had it easy. As I expected, she did rise, but she was knocked down again and again, to the point where I was starting to doubt that she would not get back up again. But she rose against all odds. Although, at the end of the book I was not sure where her story would go next. Guess we will have to wait until book two to find out.

The island nature of Aiyca was beautifully built. I felt like I was there, seeing the castle in the city and the old forest where ancestral trees grow. I was pleased to be transported into the story as I was reading. I felt like I was alongside the characters on their wild journeys.

My one big issue with the book was that the magic was not very clearly explained. I was able to glean how it worked by the end of the book, but I was left with questions about what type of magic each of the families actually has, and how guzzus work. I feel very much so left in the dark with the details around the naevus’s of the three ruling families, especially the Alumbrar’s. When described in the case of Iraya, it never seemed to be portrayed in a way that made me recall that the naevus of the Adair’s is their eyes. I feel that explanations would have made the magic of the world more easily understood. But, even lacking this knowledge, I still felt like I understood enough to know the significance of the magic within their worlds.

All in all, this book surprised me in so many ways. I have so many notes with my predictions from the beginning and not a single one of them came true. So if you are looking for something to surprise you, this book is one you should definitely pick up.

Hey everyone! I’m Gabrielle, a full time college student that tries to make sure I get reading time every day (even when I should be studying). I’m currently studying biochemistry and molecular biology, but am about to graduate so hopefully my days will soon be free for all the books I can dream of.

When I’m not reading or studying, I am usually binging a TV series and cross stitching, or playing video games (right now I’m on a Minecraft and Stardew Valley kick).

I hope my reviews help you find your next favorite book, and maybe even better, your next book boyfriend!