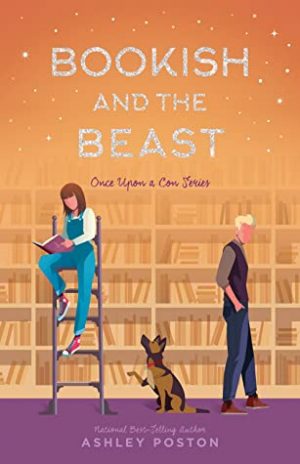 In the third book in Ashley Poston's Once Upon a Con series, Beauty and the Beast is retold in the beloved Starfield universe.

Rosie Thorne is feeling stuck—on her college application essays, in her small town, and on that mysterious General Sond cosplayer she met at ExcelsiCon. Most of all, she’s stuck in her grief over her mother’s death. Her only solace was her late mother’s library of rare Starfield novels, but even that disappeared when they sold it to pay off hospital bills.

On the other hand, Vance Reigns has been Hollywood royalty for as long as he can remember—with all the privilege and scrutiny that entails. When a tabloid scandal catches up to him, he's forced to hide out somewhere the paparazzi would never expect to find him: Small Town USA. At least there’s a library in the house. Too bad he doesn’t read.

When Rosie and Vance’s paths collide and a rare book is accidentally destroyed, Rosie finds herself working to repay the debt. And while most Starfield superfans would jump at the chance to work in close proximity to the Vance Reigns, Rosie has discovered something about Vance: he’s a jerk, and she can’t stand him. The feeling is mutual.

But as Vance and Rosie begrudgingly get to know each other, their careful masks come off—and they may just find that there’s more risk in shutting each other out than in opening their hearts.

This is the third book in Ashley Poston’s Once Upon a Con series, and I was so excited to see that it was a modern retelling of Beauty and the Beast! This book revolves around Rosie Thorne, who is grieving her mother’s death and trying her best to navigate a new reality in her absence. She is quirky, nerdy, and full of quick wit and fire that had me rooting for her throughout the novel. Vance Reigns, however, lives in an entirely different universe with his Hollywood royalty accompanied by his beastly attitude (I had to). These two could not be more different, and yet as they are forced to work together after a collision that has them reeling, they seem to find that they might have something in common after all.

The entire premise of the story had me hooked right away, and I could feel that this book would be the lighthearted contemporary romance that I needed. There were various things that I found enjoyable about this book, but I especially loved the characters. As said previously, Rosie is easy to warm up to and I genuinely found her funny and endearing. In dealing with financial struggles, college essays, and high school all while grieving her mother, we got sentimental moments with Rosie that struck a chord with me. I also liked that we got Vance’s narration, specifically how we got to catch glimpses of why he acted so beastly towards Rosie and the other characters in the book, and the change her underwent.

However, with that said, Vance did get a bit tiresome after a while in having to read the repetitiveness of how he felt that he was practically banished and how he couldn’t wait to turn 18 so he could do whatever he wanted. Also, the entire issue of Rosie constantly rejecting Garett (our modern Gaston) who wouldn’t take no for an answer felt, meh. This was where the book missed the mark for me a little because while I did feel the issues the main characters underwent were valid, I found myself not caring as much about those issues. It seemed that the issues that arose stemmed from needing the connection to the Beauty and the Beast fairytale, but I could have done without them. In addition to this, the romance between Rosie and Vance was also a bit of a letdown. While I did enjoy some moments between them, their development felt lackluster and I felt that I was missing their chemistry. The missing aspect of their romance could be a result of the fact that their interactions never seemed to amount to anything, and the only interaction that seemed to fully dive into the emotional pieces of their romance was off-stage. We hear about how much they connect and about their feelings towards one another, but it became more about telling us those feelings rather than showing us.

If you have read the two preceding stories that take place in the Once Upon a Con series, then I think that this book is definitely worth your time. It’s humorous and fun with great moments to nerd-out to. While there were some things that I felt could have been expanded upon in terms of the characters themselves and the relationships we got to see, I did have a fun experience reading this lighthearted book and would recommend it to anyone wanting to read a unique series that blends the love of Sci-Fi and fairytales into one out-of-this-world book.