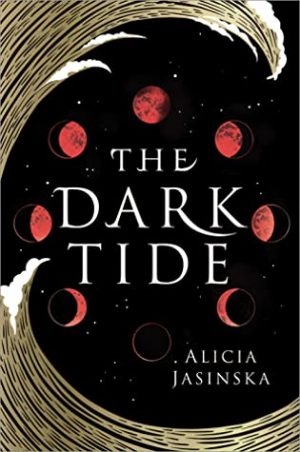 The Wicked Deep meets A Curse So Dark and Lonely in this gripping, dark fairy-tale fantasy about two girls who must choose between saving themselves, each other, or their sinking island city.

Every year on St. Walpurga's Eve, Caldella's Witch Queen lures a boy back to her palace. An innocent life to be sacrificed on the full moon to keep the island city from sinking.

Lina Kirk is convinced her brother is going to be taken this year. To save him, she enlists the help of Thomas Lin, the boy she secretly loves, and the only person to ever escape from the palace. But they draw the queen's attention, and Thomas is chosen as the sacrifice.

Queen Eva watched her sister die to save the boy she loved. Now as queen, she won't make the same mistake. She's willing to sacrifice anyone if it means saving herself and her city.

When Lina offers herself to the queen in exchange for Thomas's freedom, the two girls await the full moon together. But Lina is not at all what Eva expected, and the queen is nothing like Lina envisioned. Against their will, they find themselves falling for each other. As water floods Caldella's streets and the dark tide demands its sacrifice, they must choose who to save: themselves, each other, or the island city relying on them both.

I like to think Alicia Jasinska read Beauty and the Beast and thought: let’s make our beast a QUEEN and let’s make it dark. And I was totally and completely about it.

This book focuses on two POVs: Lina Kirk and Queen Eva and they each have something to prove. The dynamic between Lina and Eva is one that intrigued me from the get-go, especially in reading the synopsis of the book. Therefore, it became something I was excited to explore. Lina was a fun character in that although she might be deemed as a romantic who lives in fairytales about saving her love from being sacrificed to the dark tide, she fights for those she loves and turns what might be deemed as a weakness into her strength. Eva, on the other hand, has become a shell of what she used to be since her sister’s death and has slowly begun to lose hope in saving Caldella, the town she rules over.

The thing I found fascinating about this book was the entire premise of the yearly sacrifice to feed the dark tide that is slowly consuming Caldella. In addition, the darkness of celebrating the young men who were drowned to feed the tide and the eeriness to the atmosphere was done incredibly well. The concept that the boys had to be sacrificed so the witch Queen would fall in love and, in turn, sacrifice that love to the tide made me excited to see how Lina, a girl, would change this narrative. With this in mind, I think that the world-building was done incredibly well and I fell in love with the dark tone that it took on. The traditions and the world we are thrown into felt vibrant, especially through the lyrical descriptions that Jasinska took on and it entranced me from the beginning of the book till the end.

However, I do feel that although I got a good grasp of the world of Caldella I did need more characterization because I felt as if I missing something when I finished the book. While I did come to enjoy Lina and Eve as characters and the entirety of their dynamic, by the end I still felt as if I was waiting for more. I liked reading Lina’s POV and her struggles with her brother Finley and trying to understand her conflicting emotions of falling in love and the reality of it. I also enjoyed reading Eva’s POV and seeing her deal with her feelings of guilt, revenge, hopelessness, and love. The problem for me was that although I thoroughly enjoyed both of these strong characters, it was a little harder for me to get into their dynamic because I felt as if I was missing pieces of their past to build on their characterization to truly connect to them. By the end, I felt as if I hadn’t fully connected to Lina and Eva and it made me feel less invested in their relationship which sucked because I had been so excited to see these enemies-turned-to-lovers completely take my heart.

Overall, this book was a good read and I enjoyed this twisty tale filled with fantasy and magic and I would definitely recommend it to anyone who wants a taste of this dark-filled world of Caldella.