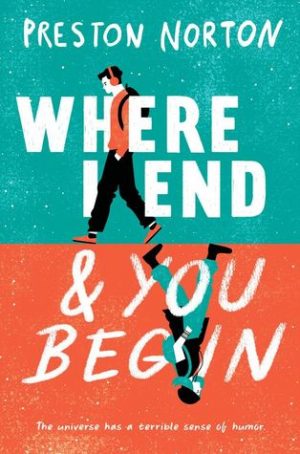 Ezra Slevin is an anxious, neurotic insomniac who spends his nights questioning his place in the universe and his days obsessing over Imogen, a nerdy girl with gigantic eyebrows and a heart of gold.

For weeks, Ezra has been working up the courage to invite Imogen to prom. The only problem is Imogen’s protective best friend, Wynonna Jones. Wynonna has blue hair, jams to '80s rock, and has made a career out of tormenting Ezra for as long as he can remember.

Then, on the night of a total solar eclipse, something strange happens to Ezra and Wynonna--and they wake up in each other’s bodies. Not only that, they begin randomly swapping back and forth every day! Ezra soon discovers Wynonna’s huge crush on his best friend, Holden, a five-foot-nothing girl magnet with anger management problems. With no end to their curse in sight, Ezra makes Wynonna a proposition: while swapping bodies, he will help her win Holden’s heart…but only if she helps him woo Imogen.

Forming an uneasy alliance, Ezra and Wynonna embark on a collision course of mistaken identity, hurt feelings, embarrassing bodily functions, and a positively byzantine production of Twelfth Night. Ezra wishes he could be more like Wynonna’s badass version of Ezra--but he also realizes he feels more like himself while being Wynonna than he has in a long time…

Wildly entertaining and deeply heartfelt, Where I End and You Begin is a brilliant, unapologetic exploration of what it means to be your best self.

I’m writing this review literally ten minutes after finishing this book and all I can say is that I am an emotional mess.

Where I End and You Begin— where do we end and begin?

This book, I can’t seem to full capture how heartfelt and heartwarming this coming of age story is. What we’ve been missing through all these YA contemporary novels about high school and what it means to be you has been perfectly captured in this book.

We follow Ezra and Wynonna, two lives that we first come to think have absolutely nothing to do with each other; besides the fact that Ezra is kinda in love (fully obsessed) with Wynonna’s best friend Imogen and has been since forever. However, Wynonna kinda hates Ezra all the while his best friend—Holden—hates Wynonna but she kindaaaa loves him??

Chaos, I know but the best kind let’s be real.

As if this chaos wasn’t crazy enough with all the hate and love pouring from all sides, now we have a case of mystical body-swapping between Ezra and Wynonna and it actually makes sense?????

I’m telling you this book has the BEEESSSTTTT kind of chaos beginning with getting introduced to this craziness and the dynamic of these four friends with: breaking and entering, an epic WWE match and of course the body-swapping

This book has everything, and the journey I went through with Ezra and Wynonna was such a rollercoaster. There were moments of chaos, of laughter (I was literally laughing out loud SO MANY TIMES), sadness (I was literally sobbing out loud SO MANY TIMES), moments of genuine happiness for these characters that just want to be happy and feel okay with who they are.

This book revolves around the question of who are we and when are we our best self? Ezra has felt like an outsider his entire life, with his insomnia and the feeling of never truly being himself. Until he becomes Wynonna but is that such a bad thing? Ezra comes to see that maybe it isn’t.

The exploration of being unashamed of who you are, being your badass self and being unapologetic of it is everything I believe Preston Norton wanted this book to be and it is. I will never stop raving about this book, and the genuine emotions I felt for each of these characters who are so beautifully unique.

Through tragedies and hilarious moments of having to experience a period for the first time or other embarrassing bodily functions (literally had me screaming), we get to experience what life can become when you let yourself be you. No labels, no shame, and definitely no apologies

If you’ve had this book on your TBR list for the longest time or if this is your first hearing of it, girl, take this moment and open up the book and dive in to the amazingness that Where I End and You Begin is.

I PROMISE you will not regret it.

Fall in love what it means to live your best life and what it means to experience genuine happiness even if life is one chaotic mess, because trust me, sometimes chaos can be a wonderfully weird thing even if it means switching bodies with your “enemy”.